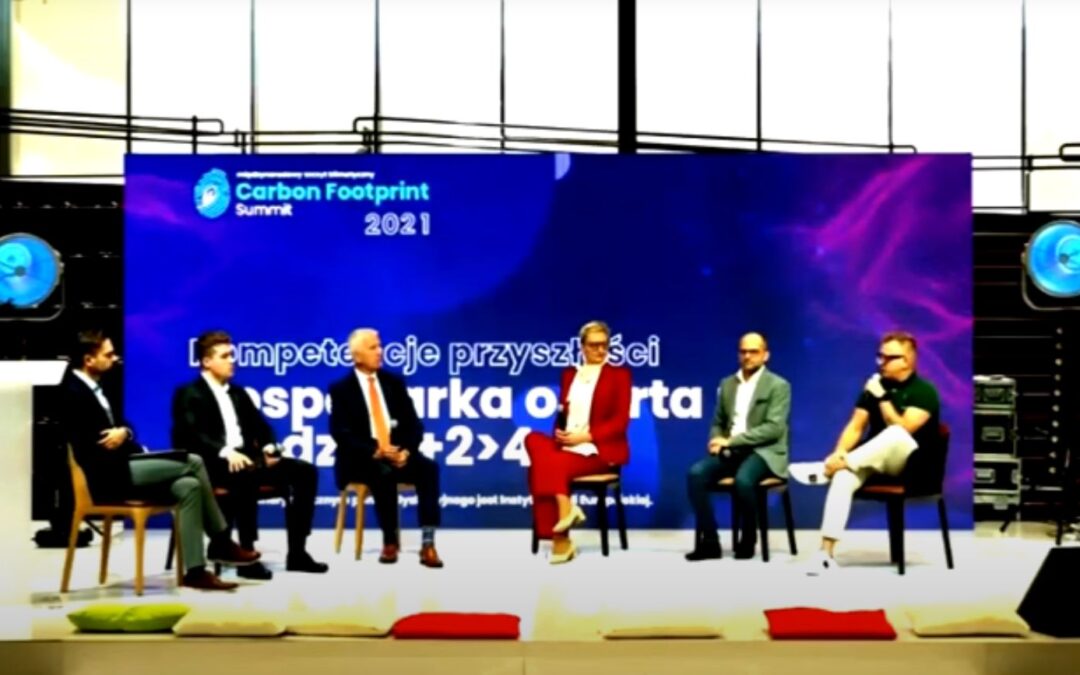 The Institute of European Thought has become a contents partner of the Carbon Footprint Summit 2021, which took place in Cracow on 8-9 October.

The Carbon Footprint Summit is an international climate summit bringing together the worlds of business, science, technology and social activism in an effort to mitigate climate change. The aim of the event is to build an interdisciplinary climate dialogue between representatives of science, sustainable business, climate activism and society in order to develop new solutions, establish fruitful business partnerships and activate society and institutions to take environmentally responsible actions.

Over the course of 3 days, our founders discussed issues of sustainable development, assessed the challenges facing business in the area of green marketing, and exchanged views on issues of future competence.

The expert discussion, in which the founder of the Institute Bartosz Dubiński appeared, focused on the basic themes of the current public debate related to the directions of energy development, including technologies and their consequences for citizens. Civic energy turned out to be the dominant theme and a potential scenario for the future. Among the postulates of experts, we noted the development of technologies leaving a low carbon footprint, as well as treating energy as a disposable good regardless of where it is produced or consumed.

The paper of Krzysztof Lech, another Institute’s founder, focused on financial areas. Our expert indicated Columbus Energy SA as an example of a company setting the standards of success in the area of corporate social responsibility. The issue of financing socially useful activities was pointed out, emphasizing that the sources used so far are outdated and inadequate to the market realities. As part of the think-thank operating under the Institute, innovative financial instruments were presented, the use of which is recommended to socially responsible enterprises. Among the many tools such as social subscriptions, charitable employee contributions, commission-based networking, social shares and vouchers, a broader discussion was given to social investment funds, partly based on the model of traditional investment funds and partly on fundraising methods specific to the third sector.

The paper showed how this source can provide wider access to potential investors-philanthropists, much more capital, and by increasing specialization improves competitiveness in the post-industrial economy. The speech met with great interest of the audience, which was evidenced by the growing number of listeners, among whom were representatives of the interface of science, business, and the free audience – regardless of age.

On the same day of the congress, our next expert Dr. Karol Sikora quoted studies showing the consumption of concrete in the world, stressing that concrete is currently the most widely used material, and the amount of concrete consumed exceeds even taking into account the commonly used measures of weight the amount of food absorbed. Such a large amount of material consumed as our expert pointed out is not without its impact on the carbon footprint. Concrete emissions have already reached 8% of man-made CO2. The speech also discussed possible ways to change these trends and provide sustainable solutions. Dr. Sikora pointed to wood as a material that meets both major requirements for climate change mitigation: it reduces emissions and provides CO2 storage. Therefore, according to our expert, the use of wood for construction is not even carbon neutral, it is carbon negative. The material, as emphasized by Dr. Karol Sikora at the end, which will revolutionize the construction industry, potentially creating the 21st century, the century of wood, may be cross-laminated timber.

On the second day of the congress, the Institute of European Thought organized a panel discussion, the participants of which debated about the competence of the future.

The panelists discussed how digitalization influences the development of employees’ competencies. They searched for an answer to the question of what the work of the future might look like, whether it will support or disrupt interpersonal relations. They discussed how robotization will affect the employee market.

Henryk Kwapisz emphasized the high ability of people of the younger generation to lead changes in the field of ecology, who because of their age are able to carry the necessary energy for change. He mentioned that the world in 30 years according to one of the scenarios may be even more concentrated in larger cities, where the competitiveness of work will therefore be even greater.

Victoria Iwanowska suggested that company values determine the situation in companies and ultimately influence company competencies, she foresees the future of the manufacturing labor market as working in the dark in automated spaces, and human labor as a hybrid. She also stated that she believes in the development of higher competencies in humans as automatons take over so-called lower functions.

Radosław Drzewiecki pointed out the extraordinary need for cohesion in organizations, such as common understanding of goals, trust, and the need to adapt to change both for entire companies and individual employees. Answering the question about the future of the labor market, he referred to studies that indicate more effective work of stationary teams in comparison to remote teams. He also pointed out the need to develop the competencies of leaders in organizations, especially in relation to remote work.

Julien Denier appealed for a better understanding of young people, who are the generation bringing change, he also spoke about the needs of remote work and the associated increase in competence.

Marcin Bryła mentioned how the pandemic has accelerated the need for digital competence, how this process will progress and how it may eventually end.

He mentioned that he believes in shorter, hybrid work, the emergence of new jobs, he also pointed to the need for high adaptation to change of new employees.

At the end of a rich congress day, graduates of the recently completed Sustainability Leadership Academy shared their version of scenarios for the development of the world situation, especially in view of the expected climate change and environmental degradation in the context of the developing epidemic situation.

SLA graduates pointed out that humanity is a species whose activities on our planet bring major changes, often fatal in their consequences. We forget that we treat the reservoir of our existence with neglect. Humanity has always been evolving, it coexists with other species on the planet, and it causes damage, which can result in pandemics, global warming, loss of biodiversity, etc.

The human species is not the only one, as stated by the participants, and in a situation of threat or crisis in which we live, it should turn towards nature. It is worth making a more conscious use of the goods at our disposal, return to the fundamental natural truths and modify our behavior to be more neutral to the Planet. A commitment to sustainable development will be the key that opens the door to safety and well-being for future generations. The graduates reminded us tha every day we see around us the effects of the Covid19 coronavirus pandemic. But do we ever think about what are the real causes of such epidemics? The presenters focused on the climatic changes occurring on earth, of which three are worth mentioning. The first of them is climate migration, which in a few decades will be a very serious problem. They cause uncontrolled growth of cities and, because of that, the occurrence of outbreaks of infectious diseases among the weakened population. Another threat are large animal farms where, thanks to antibiotics, breeders can focus on earnings at the expense of unethical animal living conditions. The huge number of animals in a relatively small space increases the chances of virus mutations among animals and transmission to humans. The last problem discussed was deforestation – in this process the natural habitats of animals are destroyed, which with weakened immunity develop diseases more easily, and migrating to more urban areas pose a serious epidemic threat.

So how can this be remedied? The solution ultimately recommended by the panelists should be greater concentration of human and financial resources in predetermined areas of increased epidemic risk. To do this, use the previously described problems in a version of map data (e.g. deforestation map, animal farming map) and overlay them to create the high-risk areas. This will facilitate more effective prevention of future pandemics by applying prevention methods to the areas described.

During this intensive weekend, the Institute of European Thought also made valuable contacts – including with the Small Step Matters initiative.

It is a well-organized crowdfunding platform working in the field of ESG. The cooperation may bring measurable results in the area of promoting the idea of sustainable development in our country.

The best summary of these few days and the great work of the representatives of the Institute of European Thought should be quoting a part of IME’s mission:

“Through education, we want to build an informed, free and self-governing society, fostering attitudes consistent with the idea of sustainable development.”

The Institute of European Thought is an organization propagating values which are the foundation of the European Community, binding its nations together and determining the direction of development. These values are peace, freedom, tolerance, justice, humanism, solidarity, work and care for the human environment.